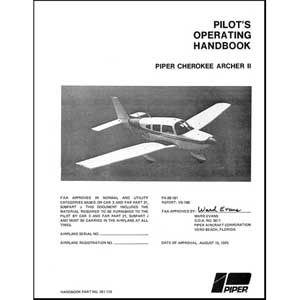 So you’re approaching checkride time! Here are some tips to help you succeed. The focus of these tips is on the oral exam, but many of them apply just as well to the flight portion of the checkride. I have tried to order the items from most important to least important.

Relax! A confident, relaxed test taker is going to more easily recall information and leave a positive impression on the examiner. Why should you be relaxed, might you ask?

Examiners don’t like to fail applicants. The vast majority of examiners are really nice people who love flying, and just want to make sure you’re going to be a safe pilot. They don’t want to disappoint you on your big day! Most will try to do whatever they can to facilitate your passing the exam, within their rules, so don’t give them reasons to question that they should be on your side!

Read the ACS (Airman Certification Standards). This is exactly how you will be tested. There should be no surprises about the general topics included on the checkride, because it’s all right here! As you go through and think about the material that corresponds to each item in the ACS, …

Categorize the material. As you’re studying, consider the content to fall into one of three categories:

Learn from others’ mistakes, but don’t obsess over the horror stories. There are lots of places online to hear about people’s checkride experiences, such as:

However, if you read these long enough, you’ll come across some horror stories that will only make you more nervous. Remember that in a set of 100 examiners/check rides, just like in a set of everything else, maybe 1-2 are bad apples. The other 99% of examiners are just going to give you a fair, standard, and non-blog-worthy checkride. So probability-wise, it’s not worth worrying about the slim chance that you get the bad apple. It’s almost certainly not going to happen, especaily if your CFI has used the examiner before.

Expect mistakes, and bounce back from them. Pilots of all skill levels make mistakes. Pilots who are nervous on a checkride especially are prone to mistakes, and examiners know this and account for it when they are evaluating you. In my experience flying for an airline, mistakes happen even at this level all the time. In that environment, luckily there is another pilot to catch the mistake. But in the single pilot world, this is on you. The important thing is to recognize and actively correct for the mistake. Also, do not dwell on a mistake that you may have made. Because the examiner is required to tell you as soon as you are disqualified on the test, “no news is good news.” Keep pressing on and doing your best.

Be willing to learn. Put aside your ego. You’re going to be conversing and flying with a very experience pilot, who has probably given many thousands of hours of flight instruction, many hundreds of check rides, etc. While it’s not supposed to happen, many examiners find it difficult to avoid doing some teaching and imparting their experiences during the course of the checkride. Put your ego aside and just be appreciate when the examiner says something, even if you disagree with it (assuming that it’s not safety of flight related, of course!), or even if your instructor told you differently. Avoid the “but my instructor said so!” line. You can debrief that kind of thing with your instructor after the test is over…ideally with a temporary certificate in hand.

Get organized. Have a professional approach and demeanor.

ACS checklist. The ACS has a checklist which will help ensure you have all the critical items needed for the checkride. 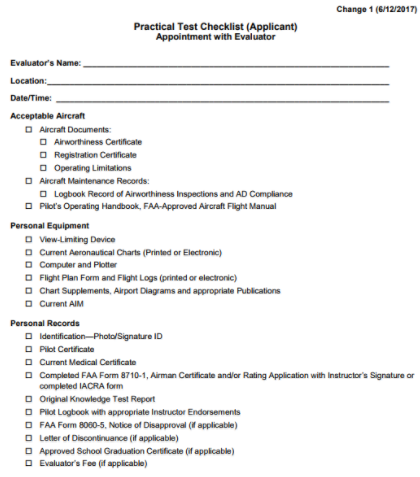 Dress for success. Yeah, in theory examiners have no right to be affected by what you wear to the checkride. A pilot in shorts and T shirt may be a way better pilot than the guy trying too hard in a suit. But examiners are human, and are affected by appearances just as much as any other person. Do your best to look presentable (I’d suggest something business casual) to help convey your professional demeanor.

Bone up on the knowledge areas corresponding to incorrect questions on the written exam. Each question you answered incorrectly on the written exam should have an associated code, indicated on your knowledge test report. The examiner may try to hone in on these areas, so make sure you’re confident that you’ve addressed any issues that you had during the written.

Some questions might be to test your knowledge, not your skill. For example, if you’re flying with the examiner and perhaps the ceiling is low, and the examiner asks “how far are we below these clouds,” the “correct” answer is “at least 500 feet,” and perhaps add “reported ceilings were 3000 ft, and we are at 2300 ft.” None of us can with only pure eyeball determine how far we actually are from the cloud. But you certainly wouldn’t want to say “I don’t know, maybe 300 feet?” and in a sense admit that you may be breaking a regulation.

Don’t be afraid to say “I don’t know.” Nothing looks worse than someone who can’t admit they don’t know something. Pilots get killed due to ego and lack of humility. It’s impossible to know everything, and it’s way better to know the limits of your knowledge than to make up BS. Always offer to look up the information, or indicate that you know who you would ask to find it. For example, if a regulation appears to have a gray area, you could consult the FAA’s Letters of Interpretation, or call the FAA to get pointed in the right direction.

Be able to use your resources. Do you have an iPad with Foreflight? You should have mastered this by now. Make sure you’re practicing for your checkride using the same resources you’ll use during the exam.

Think about your personal minimums ahead of time. As you hopefully realize, safe and legal are not always the same. The examiner needs to make sure you know the difference. If they ask you the weather minimums are for class G airspace at night, you answer with the regulation, then asks “so, what are your minimums in that situation?,” hopefully you’re not responding with “3 miles of visibility”. You’re a brand new private pilot with almost no experience. Your “envelope” of what you’re able to safely handle will expand with time, but not just because you get your pilot certificate. Consider that some examiners will ask themselves, “would I let my wife or kids fly with this person?”. Try to have thought about these personal minimums ahead of time (things like clouds, wind, night flight, mountains, etc.).

Talk to students who recently took checkride with your particular examiner. See what things they felt that they weren’t prepared for, and specifically target those areas. Your CFI should be able to give you the names of students they have previously signed off.

If possible, try to meet the examiner ahead of time. Your flight instructor might have another student taking a checkride when you’ll be at the airport. It would be easy for your CFI to ask the examiner to chat with you for a few minutes to get introduced and put you at ease.

Consider a flight or mock exam with the examiner. A lot of people probably don’t even know that this is possible. But I’ve seen examiners who are completely willing to do this. Examiners’ schedules may be quite busy and charge very high fees, however, so this may not always work. But if you can, what better person is there to practice with for the checkride?